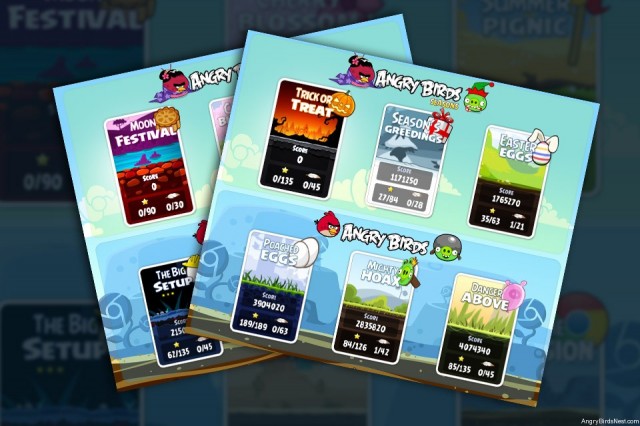 If you play Angry Birds Chrome, the past 60 days or so have been absolutely outstanding. Today’s update marks the third update in less than two months, and adds two — count them: TWO — episodes to Seasons! You can now play both Trick or Treat and Mooncake Festival (the α and ω of the 2011 Seasons lineup, respectively).

Also included in this update is a direct link on the initial “Play” screen to Angry Birds Friends on Facebook. A minor addition, but still notable, as Rovio continues to plug their Facebook app.

Thanks to @SouperBrick for being the first to alert us of this update.

I’ve also noticed that the update re-orders the Seasons episodes to be the order they came out in the original game. I’m anxiously awaiting the addition of the Orange Bird to Chrome!

In the meantime, I’m going to get started on this!

Not exactly, Summer Pignic came out before Moon Festival and Cherry Blossom in the mobile app. I don’t really understand why they put it at the end while the others are in the correct order.

Awesome! So many Chrome updates lately!

chrome is on fire these past couple of months! enjoy all chrome users!

Great update before the release of Bad Piggies in <2 days!

Two things I noticed when playing with the new episodes.

1. Trick or Treat has the Ham’o’ween background noise.

2. The moon festival background is completely different from the original seasons app.

Like, the background sounds that happen while game play.

And now the “beta” tag is gone!

please can anyone help me with my problem .. i installed the game 100% but when it loads the progression bar stuck at 60% and never moves ,, Thank you

A good update for Chrome users! I play Chrome sometimes, it lags much on my computer!

Question: which performs with less lag? Would it be Chrome or Facebook? Or is it simply a function of your connection speed?

This is a great update for the Chrome users because they have two levels at one time. Seasons Trick or Treat appears to be one of the challenging levels in the Seasons game for an above average score. It will be nice to see if there will be some strats posted to obtain better scores even though their scores may not be entered in the Leaderboard.

i said it before and i’ll say it again. When will you add a chrome leaderboard?

As I have said before and I’ll say again, Chrome users are welcome to enter scores on the original AB leaderboard, just not on Seasons.

Why im trapped in the Big Setup? It wont update