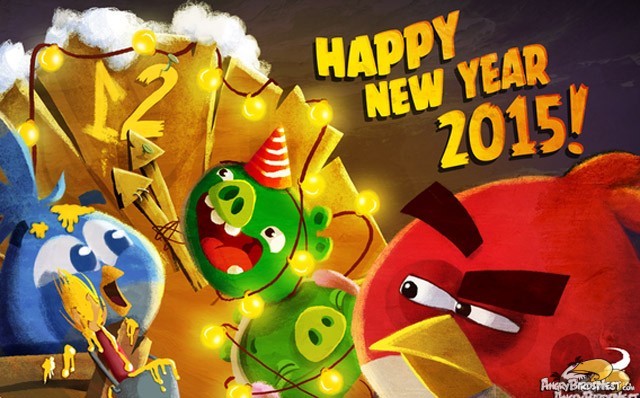 2014 was an amazing year for Angry Birds, from game launches, updates, to Toons and a glimpse of the upcoming feature film.  As 2014 ends, let’s take a look back at all the excitement that came from Piggy Island this year.

The original that started it all showed it still has a lot to offer.  It started with the second update to Bomb’s electric-powered Short Fuse episode, followed by Flock Favorites, revisiting some favorite themes from past years, then the partnership with RED for a good cause, allowing Red (the bird) to retain his magic feather powers permanently for a donation.  Finally, we celebrated the 5th Birdday of Angry Birds, where fans, including our own @sal9 , got to design levels. 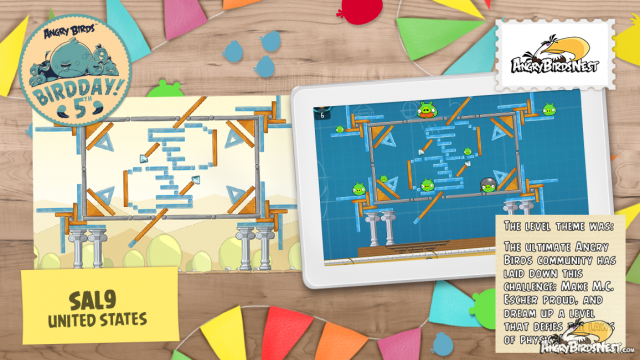 Most thought Rio was done and would never have another update, but with the release of Rio 2 in theaters, came 4 new levels, including a new version of Chuck and in a surprise twist, featuring Toon versions of the Flock in the game sprites.   Even the film’s stars, Blue and Jewel got a new power upgrade, calling in a flock of macaws to help.

Seasons took us to South Hamerica this year to deal with Piggies in a tropical setting, then back to North Hamerica to celebrate basketball season with the NBA in Ham Dunk.  Ending the year on a cold note, Terence visited his cousin Tony in Finland in On Finn Ice.  Tony is the first new playable bird introduced in the main AB line since Stella’s stellar debut in 2012.  On Finn Ice included a musical collaboration with Finnish metal cello band, Apocalyptica and offered up a new take on the classic theme song.  While there was only three season episodes, Pig Days was launched, allowing one-off levels for several special days and holidays.  Pig Days appears to be continuing on into 2015 as well. 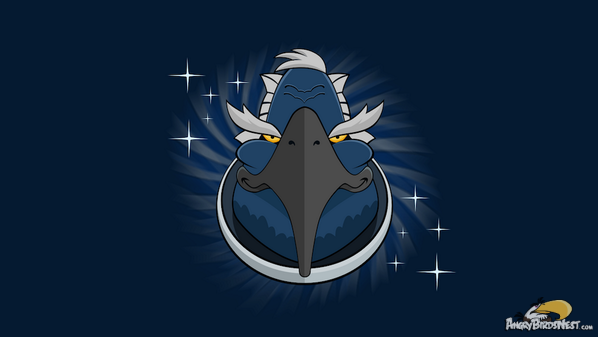 Heading to the far depths of space, we braced for Beak Impact with the new Buzz Aldrin-inspired bird, the Mighty Buzzard.

Shifting from our galaxy to one far, far away, AB Star Wars exploded with all sorts of new updates.  First was the Carbonite pack, introducing new characters to the game, then the Galactic Giveaway adding an new dimension with a hunt for coins, Rise of the Clones and Rise of the Pork episodes, based on the films, a plethora of Master Your Destiny levels, allowing you to choose any character and a Rebels episode, introducing several new birds to the game that correspond with their animated Star Wars counterparts.  With Star Wars VII coming, it’s a safe bet that this game will be around for quite some time.

Go launched a new Sub-Zero episode, where you have to drive and slide your way through ice and snow, though the telepods for this episode were cancelled for widespread public release.  A Weekly tournament feature was added with Sub-Zero as well.  Next came multiplayer racing, then a team multiplayer option that included nighttime racing.   A Christmas-themed kart was added to Sub-Zero around the holidays.

Friends Tournaments kicked in to high gear in 2014, offering a themed tournament almost every other week throughout the year, including the groundbreaking “Sneak Peak” tournament that offered the first look for the feature film coming in 2016, the first time this type of reveal has occurred in a game!  Continuing to up the ante, Friends introduced new Leagues, allowing players to climb through the ranks based on their scores.

While that would  have been enough for a normal year, 2104 introduced us to three major new AB games/platforms.  Most had a soft-launch in just a few countries, then hit a full worldwide release once the bugs were worked out. 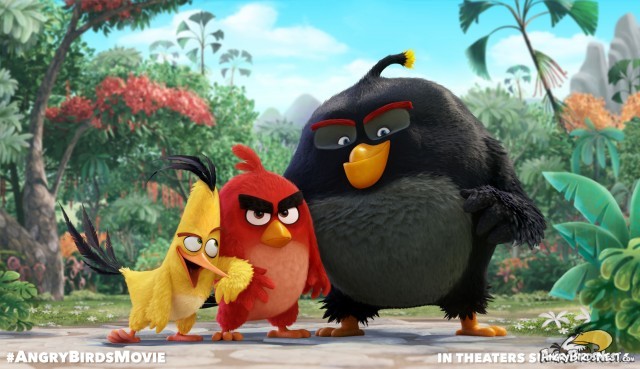 Stella was a hit sensation when she arrived on the scene in 2012, but 2014 was her biggest year yet.  Angry Birds Stella was launched, with much fanfare, introducing us to a whole new flock of characters on a whole new island.   Never resting on their laurels, Rovio updated the game late in the year with a whole new dynamic, similar to AB Transformers.  The Stella Toon debuted with longer, more story-driven episodes in a new CG format, and a second Stella game, Angry Birds Stella POP! was soft-launched in Canada, expected for a full release in 2015.

Seemingly taking place legitimately in Transformers continuity (such as it is), the Allspark landed on Piggy Island and became the Eggspark, transforming all in it’s path.  Red and the gang became Birds disguised as Robots in Disguise when Angry Birds Transformers hit the scene, including a full soundtrack by original Transformers composer, Vince DiCola!  The game is unique in the Angry Birds universe, as it is the first side-scrolling shooter game from the series. 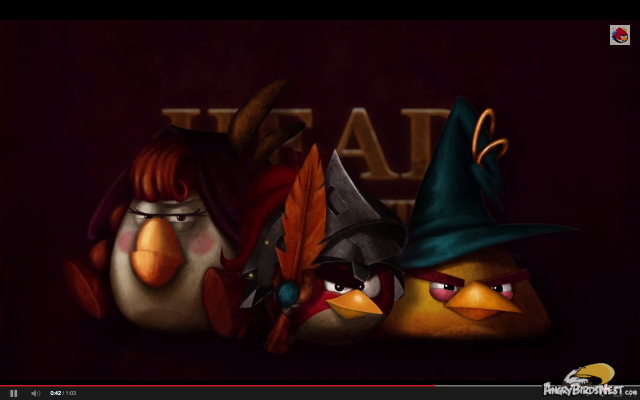 Another first for the series, Epic burst on the scene as the first Angry Birds RPG.   Set in a fantasy setting, but still with the familiar characters, Epic brought story and charm to this game style.  But before you could say “Voldepork” more updates kept coming.  Not content to just finish a storyline, the Chronicle Caves were continually added, giving new challenges to veteran warriors.   Then came a big update that added Star Rewards, Mastery levels and occasional Events within the game.  As the year came to a close, a new Player vs. Player element was added with Terence’s arrival to the game.

In addition to game updates, Angry Birds Toons started a second season of episodes, while the first season came to DVD and Blu-ray.   Piggy Tales, a claymation-inspired series starring the Bad Piggies was added, introducing us to new Piggy characters, like Dr. Pork, M.D.   As mentioned before, Stella and her Flock got a new series of their own, too.   Each Angry Birds game includes a Toons portal to watch these and several other shows now available on Toons.tv.

And if that wasn’t enough, Rovio also launched some new non-Angry Birds titles this year, including the ever-popular Plunder Pirates, plane-looping game, Retry, and Selfie Slam.   We also met Cuppy, the caffeinated star of some new animated shorts. 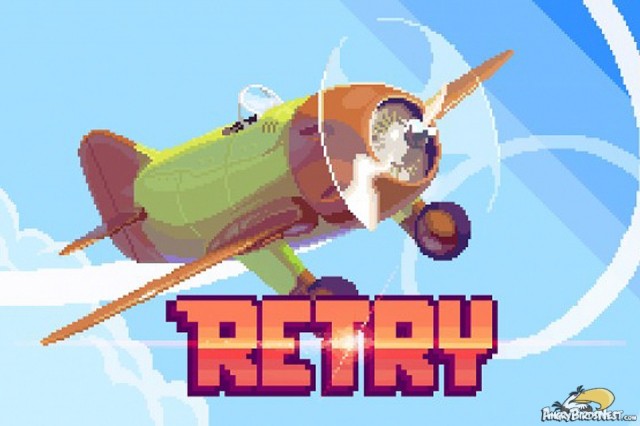 That’s one BIRDTASTIC year.   With a feature film coming in May 2016 (the date was moved from July), the Rovio bonfire just continues to glow hotter.  It boggles the mind to think of what 2015 could bring.  Hopefully Rovio will release a teaser soon of what we can expect.

That’s it for the year in review from here on Piggy Island.  Time to settle in and watch Ryan Seagull’s Rockin’ New Year and wait for the egg to drop.   But before the year ends, what did you think of Angry Birds 2014?  Are you excited for the film?  Did you enjoy Epic, Transformers or Stella as new additions to the Angry Birds Universe?  What do you want to see in 2015?   Share your thoughts and New Year’s wishes below.

I’m really excited about the upcoming game – Angry Birds Stella POP!. It will be the first 3D bubble popper in the series, and also, the very first Angry Birds to be played in portrait mode. I’m surprised that there are no gameplay videos yet. When are you planning to do a gameplay video, @BirdLeader?

Rank: Out of this World with 2565 points
By Boukman (@boukman)

I’m currently at level 22. it’s fun but challenging. Especially as you only get 5 lives, 50 coins and thusfar no extra freecoins or powerups.

Hey @birdleader we never figured out what that thing was about Chuck from the “New Year, New Tricks” video back at the end of 2013

Wow, what a busy year. No wonder I’m tired.

Seriously, they have kept all of us very busy this year Hope next year is the same :)

I’m still wading through Stella and Star Wars updates. I’ve barely touched Transformers.. Hoping we get a break for a bit to catch up :)

Yes I have a LOT to catch up on

Thanks for all the good work in 2014!! I’ve been enjoying AB Epic a lot, and the graphic of AB games and toons is always nice. I’ll continue to support Rovio in 2015 ^^

So, revisiting Rovio’s “New Tricks” video from the beginning of 2014…

Red, Chuck, and The Blues in medieval setting (with weapons) = Angry Birds Epic

I don’t recall that kart in GO!. Chuck looks like the TOON version, and he is known to wear a headband in the show (look at the preview for next week). So maybe that was a reference to Season 2 of TOONs?

The bulldozer could be a prototype of a GO! kart, that was changed later..

the bulldozer is the kart number 3 in sub zero

I was thinking of a Time Travel themed game, where you collect birds from different eras and defeat pigs throughout a time-space map

Also a big thanks to the @admins for keeping up the great work and releasing everything in a super fast way: news, new releases and walkthrough. Great job goes to Angry Birds Nest for 2014 and surely 2015 is going to be awesome!

What a great year to be an Angry Bird’s fan!

There were so many updates and new games it was hard to find the time to play every game/level.

Favorites are Transformers and the updates to AB Original.

Hope that Rovio releases at least 1/2 as many updates in 2015. Nice work at “play” to all the employees of Rovio for making this game new and exciting with every release.

Great year for Rovio and definitely a historic year in Angry Birds History! (which year saw the release for not two, but THREE great-quality games!)

As a side note, I barely started on AB Transformers =P

LOVED ABEpic, I am still playing now, and I really look forward to this year of 2015, and what could Rovio possibly do to top 2014!

Great year, really enjoyed it, hoping for another great year in 2015!!

Epic is so addicting!!! I just hope Rovio extends the story in 2015.

I really miss 2014… It was a great year for Rovio and AB.
This brought me back a lot of memories…