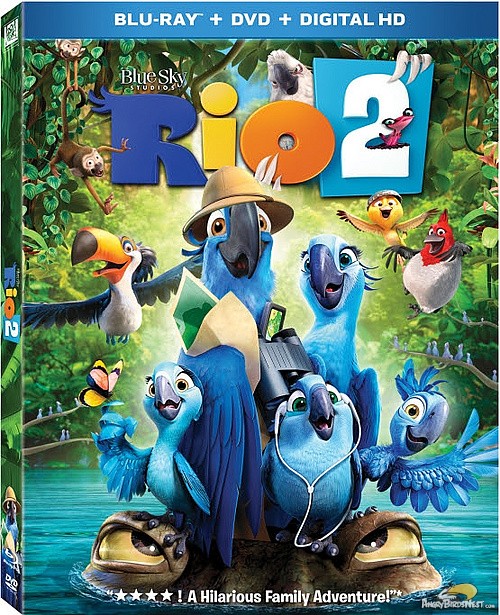 Well clearly the last one is true, because you’re here at the greatest Angry Birds community in the world! (Not to toot our own horn, but… Toot toot!)

Rio 2 is being released on Blu-Ray on Tuesday, July 15th. And if that doesn’t peak your attention, maybe this will (courtesy of FoxConnect):

That’s right, 15 new Angry Birds Rio levels! At this time, we aren’t positive how these levels will actually be unlocked. It sounds like the instructions will be unique to the Blu-Ray copy of Rio 2, and not the DVD-only edition. Way, wayyyyy back Rovio and Fox did a similar promotion with the original Golden Beachball levels. In that case, there was an item hidden in-game (mobile) or a promotion code DVD insert (PC/Mac) to unlock the levels, though they were later released universally.

Only time will tell how to unlock these levels. If there’s a trick in-game, it’s a guarantee that we’ll find it! If it’s something else, we’ll let you know of course. No matter what, the new levels will be ours!

Oh and congratulations to Germany for winning the 2014 FIFA World Cup. And thanks to @Kelani for the first report of this promotion.

It might be interesting to see an in-game unlock system. But if it is something included in the Blu-Ray package, it could be a problem for me. Still, no matter how they are obtained, a Rio update is fine with me. :)

Oh yeah, congrats Germany! USA got struck down quick, and that’s who I was rootin’ for. :( Anyway, congrats again Germany, and better luck next time USA. ;)

Glad someone noticed that post. I’ve been wondering if this release would be done differently than Rio/Golden Beachball. If you look around the web at old posts related to it, There were a lot of problems with invalid codes, errors and such. Didn’t seem like the kind of thing they’d ever want to repeat. :)

I wonder if the levels will just be added to Rio at a later date (after Blu-Ray sales drop off). I saw in a few other sources that four updates were planned for Rio, and Blossom River was the third.

This may be something to do with it

I don’t get it. Why just blue ray and not normal edition??!!

I cry “Fowl”! My husband & I don’t buy movies; rent only coz they take up space & collect tons of dust. I sure hope the levels get released open-market soon or I can get a code/info from non-birder friends. Of course I’ll be here at ABN first thing tomorrow to see if our leader or any other of my great co-slingers have sussed things out!

I thought there was one more Rio 2 Update left. Wonder if it will be on the Blu-ray or if that will just be a sample of what we’ve already received.

These excitement of anticipation of new levels has commenced. I like the last updates to Rio and hope they follow in kind. May just have to purchase this Blu-ray Disc.

It appears no need to purchase any DVD now, as the whereabouts of the hidden levels have been found & revealed!!! Great Theme’s!!