I’m Dr. Omega (@dr-omega) and this is your Angry Birds Nest News Roundup for February 24th, 2014. You can find all past news bulletins archived here. 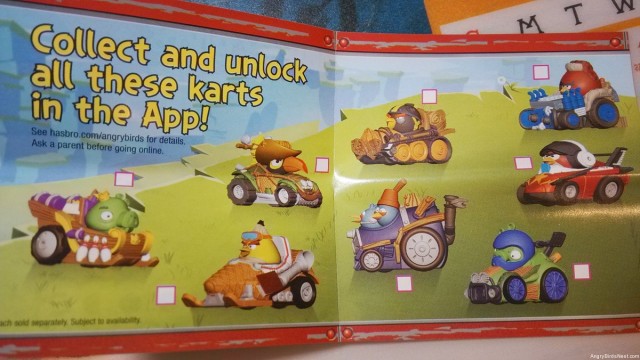 Could this mean a winter update is coming as us in the West approach Spring? Rovio previously announced that a multiplayer option would be added in the spring. It’s possible that these Telepods could be for that update, just released early to stores (not the first time for Hasbro). Check out all of @adrianchau’s Series 2 Telepods here.

In the meantime, the latest update to Angry Birds GO! has made some configuration changes that have racers seeing red (the color, not the bird). I put it to you, fellow flingers, are you enjoying the game or are you finding it frustrating? Share your impressions on the Angry Birds GO! Forum.

As a follow up to our last report on the Angry Birds Stella Telepods, @greeny356 found a video from ChipChick showing the Stella Telepods in action at the New York Toy Fair. It’s also gives us our first good look at Hasbro’s Stella toy line up.

@miezko also found this video and another which gives us our first confirmed names from the game: Luca, Willow, Poppy and what appears to be Gale (the Queen character). Also, the demonstration shows the birds being launched from a swingset rather than a slingshot. It will be interesting to see if this be the new Stella launching system!

Coming full circle, the video below shows an almost verbatim demonstration from the Hasbro rep; however, it also shows the Angry Birds GO! Series 2 Telepods at the end.

Sony Pictures Home Entertainment announced this week the release date for Angry Birds Toons: Season One, Volume Two on DVD and Blu-ray and it’s coming sooner than you think! April 15, 2014 will see the release of the second half of the fist season of Angry Birds Toons, including episodes that have yet to air on the Toons.tv site.

In addition to episodes 27 – 52, there are several behind-the-scenes features and what appears to be a new, never-before-seen holiday toon called “Easter Egg Hunt.” For a full list of the special features, see the press release here.

For the more technical-minded flingers and racers among you, Vision Mobile brings us an interesting article explaining the two methodologies of app development, using Angry Birds (Hunter) and Flappy Bird (Hobbyist) as the examples.

With the possibility of Angry Birds mixing with Transformers, the possible permutations of that partnership excites the imagination as to “what could be.” To that end, ActionFigureChecklist.com offers us some tantalizing glimpses with two galleries of bootleg Angry Birds Transformers toys from China for your viewing pleasure. Here is a gallery of the more classic Transformers style and one more showing some bizarre superhero figure versions.

I’m Dr. Omega and this was your ABN News Roundup. Good night and good flinging!

Stella is so feminine with all her accessories (Barbie style). Hope Matilda won’t be jealous :)

So exciting! Can’t wait to find out the brown bird’s name! That’s the only name left undiscovered, if I’m not mistaken?

@amslimfordy maybe what keegan mean is the brown bird on the stella poster, and not terence

I would consider it an orange owl.

I was talking about the orange-brownish bird in the Angry Birds Stella poster.
Here’s a pic:http://gadgetsid.com/wp-content/uploads/2014/02/Angry-Birds-Stella-game-release-date.jpg

Just did an eBay search and series 2 GO has not hit yet but patience will be rewarded.

As a side, AB Boba Fett Telepods are becoming more affordable each day. For those that desire one now is the time. Some are not selling for 20.00 dollars.

Also, Kit Fisto and the Red Shock Trooper two-pack have yet to hit the stores that I can find..

@sandeep-kamath – Angry Birds the Egg of Darkness is a fan-made movie and is NOT authorized or created by Rovio. Similar to their Christmas video last year – http://sikoraentertainment.com/film/

Where are you seeing “Angry Birds 2” on their site? Are you referring to this page? http://www.rovio.com/en/angrybirds2
If so, this page has been up for over a year with no information. I wouldn’t read much into it at this point.

Ok. Thanks for informing me. :)

“April 15, 2014 will see the release of the second half of the fist season of Angry Birds Toons, including episodes that have yet to air on the Toons.tv site.”
Fist Season? It’s supposed to be first season.
@dr-omega

Reboot where the birds get fists.

Dat Cute Blue bird. IT HAS A PIG HAT!

If ever a seperate fanbase of grown men centered at this, I don’t think I want to be any part of this, since my encounter with Bronyism.

They should put all of Stella’s friends plus the Mighty Eagle into Angry Birds Go! as characters you can win over and play as.

The new episode of Angry Birds Go! is Sub Zero.

I have a question: if you use a telepod to “buy” a kart (I mean to put it into your game instead of buying it in-game), is it already fully updated or do you also have to update it with coins?

That’s a good question @chriss. I don’t believe they are upgraded.

Where did u find the series 2 figure packs?!