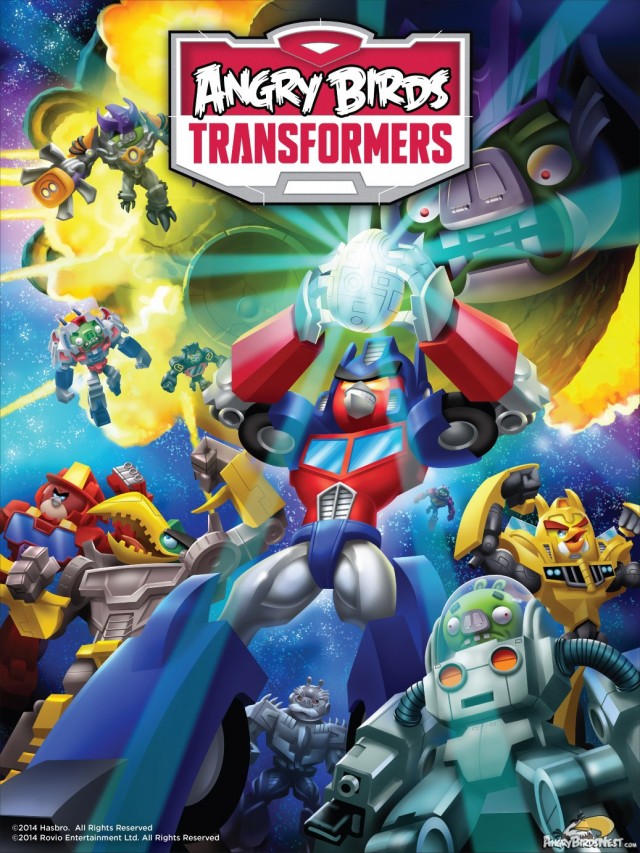 Just a few days ago we shared news about a mysterious Allspark looking egg that Rovio leaked. At the time we were unclear what exactly it was, but most thought it was an Angry Birds and Transformers tie-in. Well, you were right! Today Rovio and Hasbro announced that an Angry Birds Transformers game IS coming soon.

Details are sparse, but we do know a few things:

It also looks like we can match some of the birds to their Transformer counterpart:

The Deceptihogs are a bit harder to map, so if guys have any thoughts please share them below and I will add them here..

Okay, with all that said, one BIG question remains …

What type of game will it be? Will be be a racing game like GO!, a RPG like Epic, a traditional flinger, or something completely different. Let us know what you think by taking the poll below and leaving a comment. 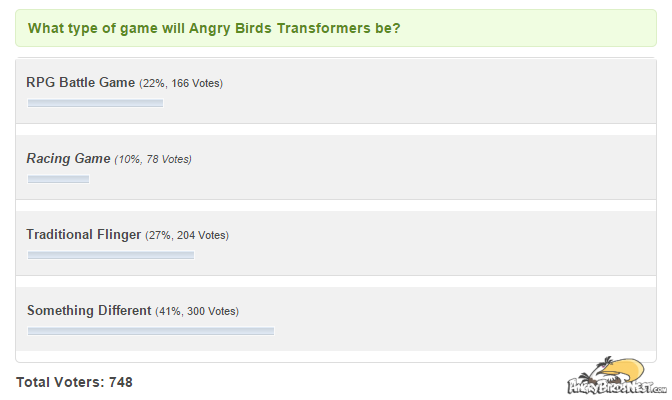 Want to know details as soon as we know them? You’re in luck, as we’ve created a Angry Birds Transformers news channel so be sure to check back often. At this point anything more that I post will be pure speculation, so let’s wrap this up with some details from the press release.

“We’re really excited to combine the iconic Transformers universe with the quirky world of Angry Birds” said Blanca Juti, Chief Marketing Officer of Rovio. “This mash-up is going to appeal to those who grew up with the brand in the 80s, as well as fans of the brand today. People are going to love it!”

“Angry Birds Transformers provides fans worldwide with a fun, new story and characters, and innovative ways, like our TELEPODS platform, for consumers to engage with the brand” said John Frascotti, Chief Marketing Officer at Hasbro. “We collaborated with Rovio to create opportunities for kids and families to experience Autobirds and Deceptihogs across multiple formats and entertainment platforms, for a completely immersive branded experience.”

Later this year Hasbro will introduce a product line featuring TELEPODS technology which will enable fans to teleport their favorite Angry Birds Transformers characters into the game and gain unique powers.

I LOVED Transformers as a kid. So much so that I collected pretty much all the toys. Fortunately, I happen to have almost all of them left, including the Dinobots! My kids will love playing with them even more now!

Look at the app icon for this app! It has the same transformers sign on the right side as the transformers 4 app by HASBRO!
That means it being released by Hasbro or Rovio was allowed to have that

Correct, it is called a collaboration. Both parties sharing their respective expertise.

Overwhelmed. Simply overwhelmed. Just downloaded epic, and is well, epic! Somehow I just can’t link transformers and Angry Birds, as the former has a mechanical feel while the latter has a more biological feel. However, I truly enjoy the designs as they are and look forward to what kind of game it may be! The most ridiculous idea I had was that this would be a COMBINATION of various gameplay, such as EPIC styled gaming, traditional flinging, and racing etc…anyways, Rovio, as always, u have succeeded in overwhelming me again and again. Great Job!

I think it would be interesting if they did a merge game, where you race for part of it, like GO! in vehicle mode, then it changes to a traditional flinger when they transform to Robo-birds..

That is exactly what i think it may be.

Rank: Out of this World with 2625 points
By Ahmad (@ahmadathar)

Now days endless running games are very popular So i am thinking that it might be a running game and there will be a special item that after getting will make your bird to transform into a vehicle.

Epic just came out so I think another RPG game is unlikely at this time.

A racing game would be a natural fit with characters, telepods and such.

A flinger game set up like Star Wars 2 is also a natural. Dozens of good & bad guy characters with a variety of powers combined with multiple story environments. I’d love to see this.

A combination of gameplay would be good evolutionary step and we certainly can’t rule out something completely. Energon Cube FarmVille? :-)

Angry birds is being taken too far. They should be making more original games. Angry Birds GO could have easily been made with a set of new, original characters that don’t pertain to AB. Yes, they are introducing new gameplay mechanics, but if this keeps happening we might just have Angry Birds Match Three or Angry Birds Teach Typing (cough cough Nintendo cough). There are games that have not been updated in months because of how many there are, and there will soon be more. I just think that something as awesome and masculine as Transformers shouldn’t be mashed up with something like Angry birds that’s geared more towards children.

Well, I for one, am excited about it. WHATEVER it is!

Eh, I’m not sure about this…doesn’t Angry Birds have enough mashups already?

Jazz is what Hal is! I recognize it! My most favorite angry birds clinger is Jazz the Transformer!!! “I’M SO EXCITED! I JUST CAN HIDE IT!”

Forbes.com says that the new AB Transformers will be a “Go” type game.

Personally I think Hal is not Grimlock at all, I saw the real Grimlock in the movies and I think he’s a giant flying dinosaur.

I saw it too,and it didn’t match..

Actually he may be Grimlock.I searched up Angry Birds Transformers on Google and it showed the website.Under the website link there was a descrpition which included the word “Grimlock”.

I like how the app icon matches the Transformers Age of Extension app icon..

Hal is Grimlock. if you drag the photos from the webpage, you see the character names.