Surprise! Angry Birds Star Wars has come to Facebook! This is a huge release, so there are a lot of details to go through. First off, to play head over to, apps.facebook.com/angrybirdsstarwars. If you’re familiar with Angry Birds Friends then this will seem familiar; however, there are a ton of differences, so I encourage you to read on.

Note, it’s important to realize that this is a “Beta” release, so things may change on a daily basis. I am also quite certain Rovio is also open to constructive feedback via our comments. This doesn’t mean you should vent your frustrations. That will have the opposite effect. Rather, if you want to be heard, a much better strategy is to politely detail what you like, dislike, and/or or propose.

We’ll go into much more detail below, but on a high level this initial release of Angry Birds Star Wars Facebook includes: 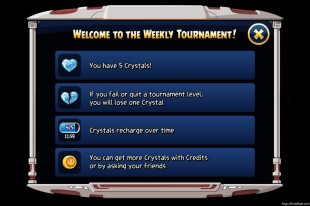 Breakdown of the Weekly Tournament 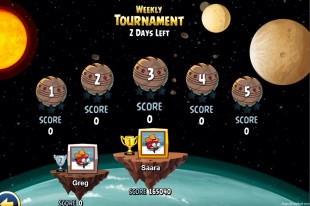 In addition to the normal levels, there is also a weekly Angry Birds Star Wars Facebook Tournament. This has become a staple of Angry Birds Friends; however, the Angry Birds Star Wars weekly tournament is quite different. First off, you have to unlock the tournament, which can either be done accomplishing an objective (this week that means beating Tatooine level #9) or by purchasing the “Galactic Bundle”, which immediately unlocks all tournament levels. But wait, there’s more:

Break Down of Shop

Below is a breakdown of what’s available to purchase in the shop. Pricing of each Power-up/Item/Bundle may change, so we’re only going to list what’s actually available to purchase, not the price of each. All purchases are made using “Credits”, which you purchase by clicking the “Buy Credits” button.

Crystals are used as part of the weekly tournament, which we’ve detailed above. To recap, it costs one crystal per level and/or restart. Crystals recharge over time or can be accumulated via the methods below:

The Galactic Bundle is basically a subscription that includes: Infinite Crystals, All Tournament Levels, and Unlimited Mighty Falcons. Currently, there are one and six month subscriptions available. These subscriptions are definitely not cheap, but if you’re a die hard player it might be worth it to you. It’s important to note that you can also unlock the tournament by unlocking a particular level.

i love playing tournaments on angry birds friends, so when i saw there was another version of angry birds that had a tournament i was very excited to play against my friends. however when i discovered i had to pay a crystal heart in order to leave it or re-start it i was not happy. i put alot of work into my tournament games and often dont succeed for the first few times so this means i end up loosing lots of hearts. personally i would love to see the hearts thing gotten rid of.

It´s only the beta version now, so it might be deleted later.

I loved the crystals for the tournament. I don’t have the time to waste sitting in front of the pc hour after hour. This puts me on a much more level playing field with my friends who live on facebook. it’s not like they don’t come back after a bit of time. I love it, thank you!