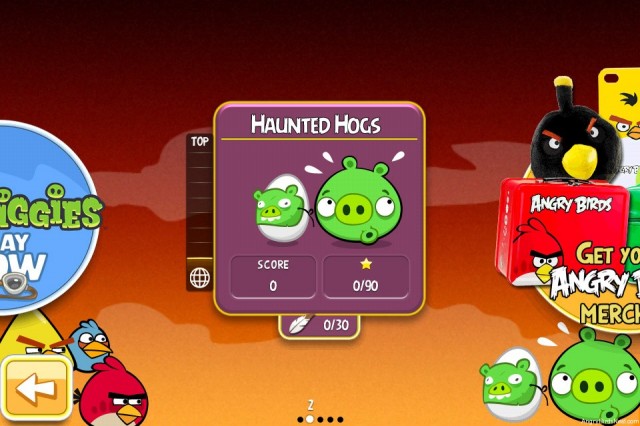 Boooo! We broke the news of this update first. Angry Birds Seasons v3.0.0 is now available for iOS, PC, Mac, and Android via Google Play and Amazon Appstore, with more platforms coming soon. The update includes a brand new episode called, “Haunted Hogs”, which appears inside a new, “Seasons 3” group. In typical Seasons fashion this looks to be a spooktacular update. Without further ado, let me jump into the gory details.

Attention Android Users: An update has landed for Google Play as v3.0.1, which reportedly fixes a crashing issue that some users were reporting. The initial release for Amazon Appstore is as v3.0.1.

The Angry Birds Seasons Back to School update introduced a few bugs, which we’ve listed out below. We will see if these are fixed and update their status as soon as possible. We will also include any new bugs that arise.

@amslimfordy i have a question. I remember, when bad piggies landed, Rovio release code of iPhone and iPad as givaway. But how that code is used to get app free of cost?

That’s just how it works. The code is basically an iTunes Gift Card for the precise needed amount and only applicable to the precise app in question.

Starbucks does the same – they have free app of the week cards at most locations. You get the card, enter the code in the app store and it downloads that specific app. That’s how I got “Where’s My Water.”

@dr-omega do you have any idea where i can get one of those code? I really want one the apps too. Thanks

Angry Bird codes? No. They only did those randomly on Facebook and Twitter as a promo for Bad Piggies.

The other apps, just go to Starbucks and see what they have. It is a new one each week, so you just need to check and hope you get lucky.

You first get to the App/iTunes Store then, go down and tap “Use Code”, write the code and tap Next, Redeem or whatever. You’ll then get to the gift page where you can install it for free (obviously, only when its uses are not expired).

@amslimfordy, My google play just notified me of an update to Seasons. I checked it and it is Ver. 3.0.1 dated 26 Oct. I haven’t downloaded it yet so not sure what it fixes.

Thanks @sparty83. See the top of the post for details.

I didn’t claim it did. As is said in the post, it fixes a crashing issue since that was of immediate concern.

I have Amazon add free verison of all the Angry Birds, when I go into Google Play it say there update but not on Amazon. Yes I know it takes a while for Amazon to update their Angry Birds game.

Question has anyone that has Amazon AB updated over with the Google Play store update?

Yes, there are members of this site who have transferred from Amazon to GPlay.

Can you transfer to GPlay if you are using a Kindle Fire or are you pretty much stuck with Amazon in that case?

That I don’t know. If I were to guess, I would say the Kindle version is needed.

Well 3 of my angry bird games are just the Ad-Free versions since i bought them before they started making the HD for the Kindles.

Yup, that’s what I did. Of course this wouldn’t be officially sanctioned because it’s not meant to work this way… but generally I find the AB save data to be extremely transferable.

(Ad-Free and ME seem to work like save data in every case except ABR. I was able to originally get the ME on ABO via the T-Mobile special and then update Google Play over it and keep the ME.)

With the development of this ghost brick thing, Rovio maybe plan to produce a gas giant episode for Angry Birds Space. :-)

FYI – I found out that if you have an older iPhone (4, 3S, etc) you will need to update the OS to 4.3 or better in order to get the latest updates for Angry Birds Seasons and Bad Piggies. Be prepared to back up your phone to update.

Great Halloween episode, Loved the haunted house setting and the ghost bricks! Keep those updates coming Rovio they are always much appreciated. Thanks ABNest for keeping us up to date.

The update is out on the Kindle Fire at Amazon. The phone version still doesn’t look like it is updated.

Thanks @Old-Man-Bird. I’ll keep an eye on Amazon, as it’s likely to roll out soon.

I am not seeing the 3.0.0 update on Amazon for the Kindle Fire. Mine is still 2.5.0. with no updates available. I have the AB Seasons ad-free. Maybe it will show up soon. I still haven’t received the update for AB either. Did contact Rovio about that but haven’t received an answer. Think I’m ready to buy an IPad so my updates come in sooner!

As far as I can tell there are no updates for the Ad-Free versions on Amazon yet but I’m hoping they show up soon the fact that we are now 4 updates behind is ridiculous to me.

Anybody knows this? Will the HD versions be playable on an iPad mini? Or only the SD versions?

I haven’t seen any details about how apps will work on iPad Mini.

I watched the apple event of iPad mini. They said that it is just scaled down iPad. So, every app that support iPad will support iPad mini
I loove iPad mini

The ad-free and ad version of Haunted Hogs ABS are available this morning on Amazon. HD version was available yesterday.

Got it this morning. Thanks @oldmanbird and @amslimfordy for the info.

I got my Amazon app store update this morning for Season I just the Halloween theme this years. I almost was going to jump ship and get all Angry Birds on Google. It hard to give up a paid ad-free app. Now where is OG Angry Bird update.

I debating buying my Bad Piggys off the Amazon app store with the way they update don’t think I want to give them anymore money till they start updating their apps more on a timely manner.

I got tired of waiting for Amazon to update the OG Angry Birds so I just updated over my Amazon OG AB so far it working fine and all my progress is in tack.

I think new year egg bug was fix, this screen is i just install, and egg is shine.

And that finger is new thing?

The “finger” appears the first time or two that you use a new bird. It sounds to me like some of your settings got reset. I highly encourage you to check ALL episodes to make sure your progress is intact.

@amslimfordy, if you remember i’m a nokia/symbian user, because rovio reply is firmware issue cause no update to symbian, i buy a android tablet, and i found a way to transfer progress from nokia to android.
That screen is i take before i restore my nokia progress.
Seem new year egg is solve.

Finally for Mac! but I have found some things:

1.- The “HD” sign dissapeared from the loading screen on Mac
2.- The flying objects of the episodes with no 3 stars came back
3.- The buttons “Level Selection”, “Repeat Level” and “Next Level” (when you finish a level) are BIGGER
4.- When I open Angry Birds Seasons and then I change the window and then I return to ABS, the screen gets freeze for a short time and then it close, and a message appear (in spanish): “Angry Birds Seasons se ha cerrado inesperadamente”
5.- I know that the golden eggs from Mooncake Festival are un-flip-flopped, but I can ONLY open the 3 Stars Golden Egg, and I don’t have the 3 stars in all levels, I can open the other Golden Egg, but I collected THE 8 PIECES.

Please help me on the Number 4 and 5.

PD: It’s a very special thing that the update came for Mac on November 2 (“Día de Muertos” here in Mexico)

5: Rovio is still investigating the “locked Big Items” issue. I have provided them with some data files (after this release) and hope that it will help them diagnose the issue.

That said, if you would like to help, you are welcome to email me a copy of your settings and highscores lua files. I will forward them to my contact at Rovio with some additional details.

Thanks for that, but now i am worried, because now when I open ABS, a message appear asking me if i agree to restore windows, but then the message of “Angry Birds Seasons se ha cerrado inesperadamente”. I think that this I can do it by myself, because the same happened to me but with Angry Birds Rio 1.4.4. I will send a e-mail to Rovio (the same thing I did with ABR).

Flying object also have wromg with my new android device. I transfer from my nokia device, old c.mas not yet 3 starred, but flying object on that episode showing star.

Please someone help me! Rovio doesn’t send my e-mails! ABS still don’t opening and I only remember that I have to erase a folder and do something with the Termilan application. I want to play ABS!!

Thanks for the report @mighty-eagle! You’re really helping us out today. Can you tell us anything about 46, 47 or Piglantis?

P.S. I clean installed Angry Birds Seasons from Mac App Store after upgrading to OS X Mountain Lion few months ago and haven’t transferred my scores from iOS since then. Maybe that’s why I didn’t face any problem with above bug.

That New Years Egg bug is going to be tough to confirm whether it is fixed or not. It only effected a small percentage of people. I’m hoping one of those people who reported the issue can let us know. If I get one of them to say yes, I’ll call it fixed.

He said he wasn’t affected by the bug in the first place.

At the last level of the haunted hogs episode, zoom out and you will a see a block moving side to side floating in the air, this house is creepy!

I think this is for PC only, try to change the resolution of the window to 667×729

Is this new? Or did I JUST realize this?

Did anyone on the Amazon app store get a update for Seasons? I am not going to update it cuz by the pictures it looks like it takes you back to St Patty.
Beware some of the reviews said it wipes there progress. Make sure you Angry Bird games are backup.

@novojit Please see my response above to this issue.