There are two Golden Eggs in Angry Birds Seasons Ham’o’ween. The first is hidden in a level and the second is the “Big Black Pumpkin” level.

Golden Egg #25 – Big Black Pumpkin is unlocked after you 3 star all levels. Once you’ve accomplished this goal tap pumpkin in the middle of the screen to open up the level.

Golden Egg #26 – Level 2-2 zoom out and you’ll see the Golden Egg sitting on a ledge in the top right hand corner of the screen. Notice in the screenshot below that there is no bird that can reach the ledge, but there is a pile of pumpkins and boulders in middle of the pigs’ structure. The best bet is to place a bomb bird at the bottom left of this pile so that the pumpkins and boulders fly up and to the right towards the Golden Egg. It takes some luck, but you should be able to get it after a few tries. 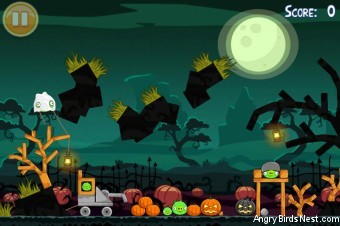 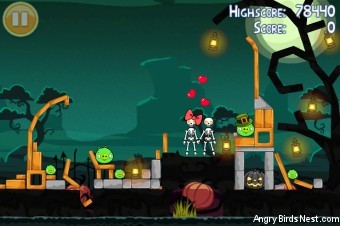 Really hard to get this golden egg.

You need to shoot the black bird towards the bottom of the pumpkins and hen explode it. The pumpkins will shoot up and get the egg. Took me a few tries.

This method worked well after a few tries. Have to keep after it a bit.

Is there a golden egg on Hamoween 1-7? When I zoom out, I can see a sliver of something yellow in the bottom right corner.

No egg. There’s a tuft of grass just right of the tree. Perhaps that’s what you’re seeing.

I don’t know if this is a coincidence, but in 1-13 I found a patch of grass that randomly appeared.

Are you sure it didn’t simply fall from the sky after being launched from the main structure?

Dsappointed there’s only one egg to get. Love the new bird though.

I found it easier to use the orange bird – it shoots the boulders with much more speed, but can be a bit difficult to aim. The black bird method didn’t work at all for me though, which is why I tried the orange bird in the first place :P

I have 3 stars on all levels but the big black pumpkin is not lit and I cant open it :( bugfix?

Not bugged that I know of. You have to defeat the level to get the stars lit.

You can play the level even if the black punkin its not lit,

I have the same problem. Completed all levels w/3 stars but pumpkin won’t light up, & when I touch it nothing happens.

It doesn’t light up till you complete it, should open when you tap it, if you are sure you have 3 stars on all levels:)

Yes we are sure we have all 90 stars. I still cannot get it to work.

throw a bomb bird at the two bricks on the left side of the pumpkins.This is the best(and possibly only)way to get them.

Thanks!!!! That is much easier. Two tries….done!

on my n8 dont av the halow ween level its called trick or treat any golden eggs on that ???????

There are walkthroughs for all Seasons Golden Eggs. Hopefully Nokia receives Ham’o’ween soon.

I can’t find the walkthroughs for the hamoweem golden egg and the big black punkin I have them both but just curious of high score I have 3 differ scores for the egg with the pig driving the hammer truck.ty for help and I want to commend the angry bird team for the patience they all have with my dumb questions ty:)

Just click either one of the screenshots above to see the walkthrough for that Golden Egg. Remember, they are two part videos.

i found a much easier way – aim the bomb birds at the lower double bricks directly in front of the slingshot. When it explodes, it’ll shoot the grass into the egg. Very easy. Took me only 2 tries. :)

Im newer to ABS so sorry if this is a dumb question. I got 3 stars on all levels but the big black pumpkin is still greyed out and I can’t enter that level. Suggestions?

What device are you using. Have you verified on the Episode Selection screen that it reads 90/90 stars.

Big Black Pumpkin is unlocked after you 3 star all levels.
can someone help me pls
i have 3 stars on all level and yet i can’t get the big black pimkin

What device are you using? Have you verified that the episode selection screen says 90/90 stars?

I have 3 stars in all episodes and the black pumpkin is still not lit and does not do anything when touched on my iPad! Need help! Thanks!!

Can you verify on the episode selection screen that it says 90/90 stars?

Clearly there is a glich you keep asking if everyone has 90 stars the answer is YES…….Fix the problem.