Angry Birds Seasons Back to School Update Out Now

Are you ready to join the birds and the pigs as they head back to school! I hope so, as the birds need your help take back the playground from those not-so-menacing pigs. After a short wait we are excited to report that the Angry Birds Seasons Back to School update (v2.5.0) is now available for iOS, PC, Mac, BlackBerry Playbook, and Android via Google Play and Amazon Appstore! This update includes a bunch of stuff and lifts the veil of secrecy surrounding the brand new pink bird, which we reported about last week. We’ve outlined below what we know so far about the pink bird, her power, and this update in general:

Note for PC users: Some people have not been notified by the in-game updater. Instead, go to download.angrybirds.com and click on “Download Free Demo” on Seasons to get the newest .exe file. If you are worried about your progress, check out our Ultimate Backup Tutorial.

The Lowdown on the New Pink Bird

The pink bird first appears on level 1-5. Her power is the ability to blow bubbles, which can trap blocks and — you guessed it — pigs. Once trapped the bubbles rise slowly with their cargo and then pop moments after, letting the blocks/pigs fall back to earth. This is definitely a unique ability that will take some getting used to. It’s also important to note that, much like the sardine can, she is very bouncy, so direct hits don’t do much, if any, damage.

What follows is my opinion of the pink bird (for those who care). At first I was a little skeptical about the new pink bird, but after having played through all the levels I have to say I’m very impressed. Not only is her power very creative, it is also extremely well executed. Rovio could have opted for something easy and predictable, but alas, the pink bird and her ability are nothing of the sort. I’m not sure if the pink bird is filled with flubber or what, but unlike the rest of her flock she bounces like crazy and can only penetrate the most damaged wood. There are no other birds even remotely like this (well, I guess the red bird can’t inflict much damage either). Not only that, her bubbles don’t affect all objects equally. Heavier objects float up slower than lighter ones, and if there is too much weight above them, they don’t do much of anything. All this means that you have to plan your shots and they need to be quite strategic. To me this boils down to very fun gameplay and a welcome addition to the flock. I can’t wait to see her make her way into future levels (could be very interesting in Space!).

We are compiling this list to keep an organized, easy-to-reference list for users and developers alike. We are confirming platforms as the update is released.

Update: Angry Birds Seasons v2.5.1 has been released on iOS, presumably with more platforms coming soon. Repaired bugs still include their details for the sake of completeness. 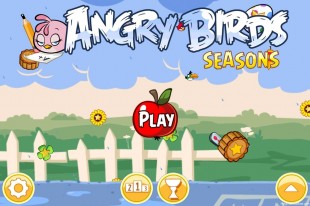 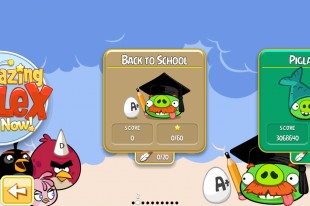 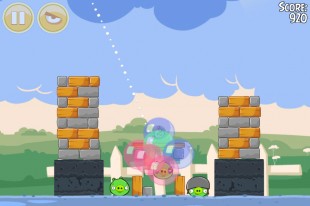 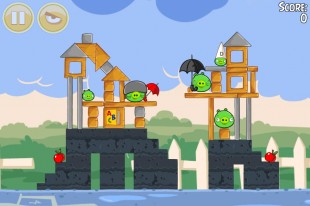 My angry birds season is still not updating. Any possible way you can help me guys? Or i just have to wait for it to update? :(

Note for PC users: Some people have not been notified by the in-game updater. Instead, go to download.angrybirds.com and click on “Download Free Demo” on Seasons to get the newest .exe file. If you are worried about your progress, check out our Ultimate Backup Tutorial.

Do you mean that if I updated the game, my progress would be loss and must download the latest version from the quote above?

Downloading the new exe file should hold your progress just fine. But no installation process is perfect and it is better to be precautionary than sorry.

Piglantis: you must have had three stars on 2-9 before the BTS update, which raised the min score from 100k to 102k. Once the big shell is unlocked, it stays unlocked.
The main menu items (skull, book, starfish etc …) get “unlocked” and show up when you complete the episode. A golden star is then added to that menu item when you have three stars on all levels.

Ok, I understand the first problem. I say that I complete the Season’s Greedings episode (all levels, not 3-star on all), but I don’t have the present. Before I could see it. Another problem that I didn’t say. My Seasons 2011 progress has been deleted! I can play all the levels at any order, but I have no stars. I can access the Big Levels and the Golden Eggs. It only happened in that chapter (Seasons 2011)

Sorry about bad English. I’m from Spain. When I said “Before I could see it”, I mean (in Spanish, use a translator for translate it please) “Antes lo podía ver”

There is something wrong in the Mac App Store, Mac users, have you noticed?

The first image in the Mac App Store (the app, not the webpage http://itunes.apple.com/us/app/angry-birds-seasons/id476312611?mt=12) about Angry Birds Seasons, I see that the image shows the current loading screen, but the image shows the Piglantis Logo, not the Back to School one. Another Rovio Error?

I have also a screenshot: (Sorry for my bad english in the last comment, i’m Mexican)

Just a small omission, really not a big deal. Good observation though.

Thanks @eherrera32. I’ll do some searching.

But only for HD I think.

You are right, Slim, it’s out for SD as well now.
Did you find out what the changes are?

I only see the “Christmas” bug fixed, though I hoping some of the users having issues with the Big Present will report back with an update using v2.5.1.

The update is awesome and all, but I wish Rovio did a few things like they did in Classic:
1. Change Green Bird’s feathers, when it hits something, green instead of yellow.
2. Change Big Brother Bird’s feathers dark red instead of red. When I think about it, they should do the same thing in Angry Birds Rio, along with the animated info pages.

Other than those things, everything else is awesome. I’m not complaining or anything, but a little tweak couldn’t hurt every once in a while.

Any one help me!my pc is not updating automatically and i can’t download the latest version from download.angrybirds.com ,because my Internet connection is slow!

Sorry to hear that, but we can’t really help you with your internet connection.
Maybe you should contact your ISP.

Rank: Slinger with 1105 points
By Me Gusta (@angry-didier)

On the loading screen, pink bird pops out while red and white are next to the next. So, are the parents of pink red and white birds? Kinda weird.

Now that you mention it… O.O XD

Why Rovio, WHY PUT THE DULL RESULTS SCREEN FROM ABRio?! Why?!

It’s freaking stupid to throw in the trashcan that cheerful fanfare we used to hear and putting in instead a dull, unspecial, ABRio-styled results screen. Wasn’t that game enough?

I think that they should keep the current winning animation, but bring back the jingle and add it to the animation. Anyone agree?

danmario, we all loved this change except you. So, regardless if u mention NOW

There is mighty eagle for pc?

Not at this time.

As this post says, the “Back to School” update was released for PC a while ago.

Hello everybody Iam a PC user and back to school update didnt show yet .. am i the only pc user having that problem or what ?
thanks

No you are not the only one. The update function for pc doesn’t always work.
Just re-download the demo for the latest update.

Please read back at bigining, note for PC user

The red text at the top of this post answers your question.

Thank you very much .. It worked perfectly
but level 2-9 in piglantis my score was 100610 and three stars but after the update it became only 2 stars

Sorry i didn’t see it … Thank you again

Symbian just got an update for AB:Rio. But we aren’t really well aware of their plans. You are best off trying to contact them directly.

I’ve always predicted privately that when they changed the font on the Piglantis update, they were gonna add the Rio-esque thingies on the next update.