It appears that Rovio is focusing on bringing the desktop platforms up-to-date on Angry Birds apps, as PC has received its second update in as many days. Yesterday, we announced that the Cloud City finale was released for PC. Today, we are proud to announce that Angry Birds Rio v1.7.0 is now available for both PC and Mac!

This update features a major overhaul of the graphical user interface, so let’s not waste any more time. For more detailed information about this version, see the original release post.

As always, please do NOT enter Power Up scores on our Leaderboards. Please note also that Angry Birds Rio includes no score distinction between Power Up and “pure” scores whatsoever, so for the recreational PU user, be mindful of your usage and score entry here. Suspicious scores will have to be removed, unfortunately. 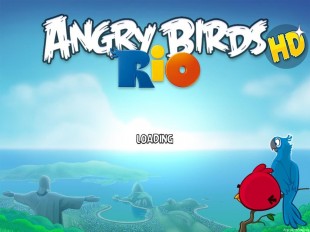 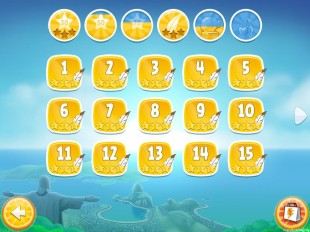 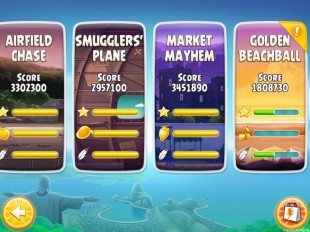 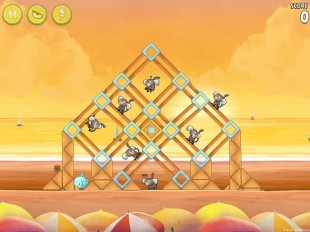 Finally Rovio made two updates for PC in a row!
Yay!

Only ABC and BP left

Great thing!! It seems to be Rovio want to bring the PC Games to the latest time :-)

These two games, Market Mayhem and Golden Beachball are fun to play. It is fantastic that Rovio has made them available to PC users. Nice job Rovio!!!

Finally, i’ve benn waiting for this…

this is brilliant, finally! Only one problem, the update icon isn’t coming up! Shall I just wait, or is there any way to speed things up?

@the-mad-hatter For PC? You can go to download.angrybirds.com and click on “Download Free Demo” under Rio. Install that .exe file and you’re good to go!

Thanks very much @AMslimfordy, I’ll try it right away!

I just updated Rio on my PC today, and strangely enough, I had to do it twice, as the first attempt failed. Perhaps I tried to download it when Rovio’s servers were clogged with download requests, but I got it now. Truly a big day for PC flingers out there!

All that remains for true parity is the addition of the ME for the PC versions, but I’ve been squawking about that for a while now.

The long wait for the P.C users is now over these update was long overdue.Thanks Angrybirds Nest team as always for providing the update info.

Been waiting for this update.. thank you Rovio for getting this out to us.. and thanks ABN for posting the news!

Thank you Rovio, I saw the update and downloaded it just before I left for work this morning!

It’s so much fun playing on the “big screen”, and I love not getting the power up pop ups when I play on the PC!

You know, you’re right! I wasn’t even paying attention to the power ups, so I never gave it a single thought. I’ve been so used to it on my iPad, that the lack of power ups should have registered.

Ditto @kathi17. I prefer the big screen too and not just for the absence of power ups. I bought an iPad last year just to play the “missing levels” from the PC Angry Birds games but have found I prefer the mouse and find I’m much more accurate on the large screen. I still play on the iPad though as that’s where my Star Wars AB App is and the iPad has been useful when away from home for emails, Skype and facebook chat.

Hooray! Between this and AB:SW update, it’s going to be a busy (but fun) weekend playing all the new levels. Even more if they manage to go 3 for 3 and get AB:O out Friday.

The new interface of AB Rio is awesome!

I wish Rovio would have included the Pink Bird in at least 1 level, i miss her…

What is the meaning of the exclamation mark on the Golden Beachball episode?

It’s to bring the new levels to your attention, since they were added to an older episode.