On your marks! Get set! Angry Birds Go! v1.10.0 is now available for iOS and Android! The Angry Birds are going halloweeny with this update, including:

Note: There are reports that the update causes some Android users to loose their progress. If this is happening to you, don’t panic! If it’s not working leave a comment and let us know.

Lost all your Progress? There is a solution

If after updating Angry Birds Go! to version 1.10.0, you lost all your progress, no need to panic.
The solution: contact Rovio Support directly, and they will restore your progress. 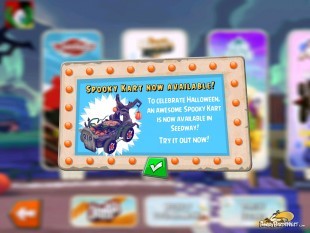 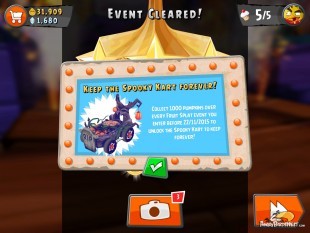 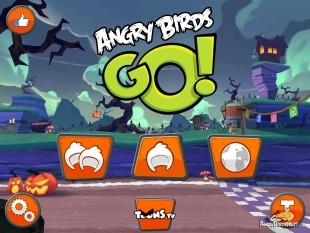 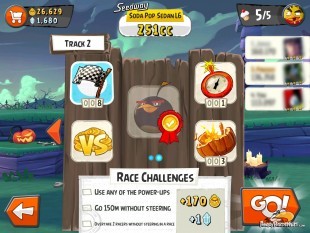 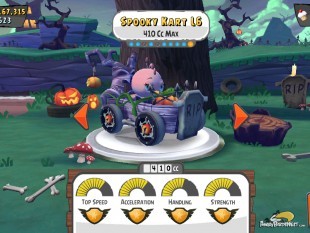 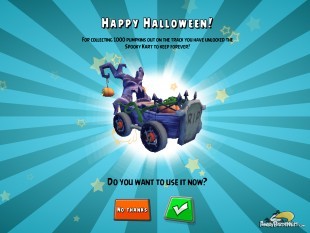 Let us know what you think of the new update by leaving a comment below. If you need help or want to talk Go! be sure to check out our Angry Birds Go Forum.

I unlock the new kart. I improved it at the most. The game crashed. I launch again : no more Kart?

You’re not the only one @grimmjow
Open a ticket with Rovio support so that they can investigate.

Lost all my gems and coins when switched over to Halloween format on android devices.

I hope Rovio brings back the Santa Sled, because my game got erased RIGHT after the update ended :(

I updated my angry birds go app on my Android that I have been playing for months and now I have lost all progress. I had every level unlocked. Can you restore my account? Otherwise, I will not be playing any more. There’s no way I’m starting over. Thanks.

First, all the issues below have been documented with Rovio support
Second, I am avid racer of this game and #2 ranked racer and team captain of #1 ranked team in the game. So, I share this to say my post is coming from someone who loves the game and not venting frustration of a poorly upgraded application. You’ll find many posts from me on the Angry Birds Go! Forum.

If not too late, I suggest AB Nest users turn off their “auto update” and wait till some of these items are fixed by Rovio before updating as this version is full of technical spooks!

1. Slow load times on Android at initial load and to load track races. Could be my device but the old update worked fine.

2. Spooky kart disappears after you earn it “forever” by completing task

3. Gems are not provided for watching videos or advertisement despite the illusion they’re given. Game crashes and then gem counts reset

4. Single player mode. Game will crash or freeze in middle or end of races. The freeze on my device locks my entire unit from working forcing me to remove power source and re-start device. Again, I have an old Android device (Samsung Galaxy S3) but the old update worked just fine.

5. Single or regular Multiplayer (i.e. racing against 3 opponents) seems to work okay but same as #4 above happens from time to time.

6. Team multiplayer function (i.e. racing with 2 teammates and versus 3 opponents) has not worked since update came out. You can progress through your team page and attempt to race but then get message “you need to be online to proceed”. This message appears even if you have full WIFI or internet connectivity. iOS users have experienced this for sometime since a redesign came out. Now impacting many Android users like yours truly

My positive comment is the graphics are improved and the Halloween themes on some tracks and the main navigation pages is a nice change. It’s unfortunate this update came out without more quality control

See you all on the track … eventually :)

Re #2 – Rovio support contacted me and restored progress so I could re-acquire the Spooky Kart. I did so. I max’d it out and exit game properly. Return to game and the kart is gone. ticket re-opened as they did not fix the bug

Anyone bought the “Lucky Goat Kart”?

the “Lucky Goat Kart” sure is cheap “costs 8 coins to buy” but the upgrade is very expensive, I had to play the Seed Way track to gain alot of money just to upgrade the kart, Why is it a lucky kart?

I bought LG888 some time ago, but I had feeling that kart is weaker than normals. I don’t recommend it if you’re buy first kart for Rocky Road.

@rowdypup Something for you – Mighty Eagle is in first cart at the background. Sight of new update coming?

@mp127 it looks like him- 2 other people behind him, but they’re too small/far to see who

For second cart, my thought is they’re the Eggs. Third is really far, but driver there has long beak. Looks like Hal, but it can be someone new.

@mp127
Can you take a screenshot if that,please?
Because I don’t want to update…

That’s only thing I saw. Here’s better quality photo, and I think it’s Egg with Halloween hat in no.2 cart.

or is it just an error

I reinstalled this game just to get the kart, and I got a complete account progress reset instead! O_O :( I accidentally let the progress on my device (0%) overwrite the progress on my account (about 80%) I requested Rovio to restore my account. If it’s too late, I hope they’re willing to recompensate with millions of coins spent on upgrades. (and 1000+ gems.)

I lost all my progress after updating.

If after updating Angry Birds Go! to version 1.10.0, you lost all your progress, no need to panic.
The solution: contact Rovio Support directly, and they will restore your progress.

Had to earn the spooky kart “forever” twice. Then it was gone. The thousand pumpkins was nothing so, I was only a little irked. Now I’m an angry bird. Was about to submit to Rovio but, thought I would come here first. A couple of weeks ago I got the tubcopter for winning the weekly tournament. Went to get it in the showroom and got nothing. I was about to break down and submit to Rovio when like magic, it appeared. Hoping the spooky kart appears too.

for some reason Angry Birds Go loads but then shuts down on the iPad3. Is there a known issue?

I won the event and the new kart is vanished… It’s there no spot for the kart and i can’t really have it.. After i achieving the goal of pumpkins i got the car and made some upgrades, then, next time i opened the game, there was no new kart…

in the loading screen is the mighty eagle in a kart