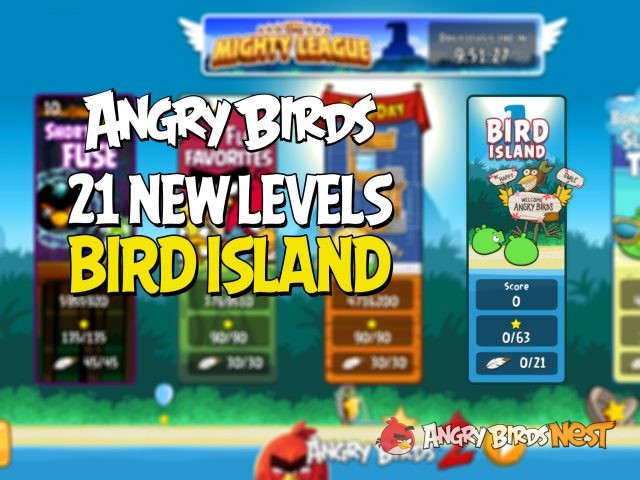 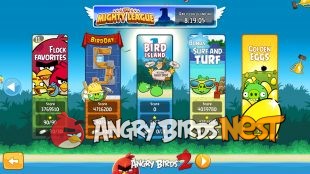 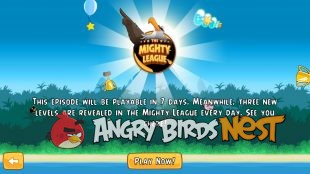 Well they are at least updating the original with new levels. That’s good.

How long does the original haven’t been updated until now?

Interesting that all the pigs do not have to be killed but the time limit and score are the significant factors.

At last, we are getting a new episode on the original Angry Birds game….sure has been awhile since Short Fuse.

Has anyone made any progress for the sticker about finding tickets from movie levels?
I thought this would be for when the levels are actually released. But turns out I was making progress for the other sticker of playing the movie levels. And also the stickers of popping pigs and flinging birds didn’t count from playing regular levels. So seems like finding tickets also needs to be done within the league levels?

2 important notes: new GE can be obtained ‘just’ by clicking the sticker and then the egg, you don’t need to obtain the sticker.

@mp127 Thanks for the tip. I was wondering why only 32 Golden Eggs were displayed even though I have 33 stars.

@mighty I have 34 golden eggs…are you missing one?

Oh is that an iOS exclusive (my bad) …. I assume that is the golden egg that has red on the front of it.

I learnt something new today as I didn’t realize Rovio branched created an exclusive golden egg.

Thanks @mp127, i no need to play that mighty level.
Yeah, i see double egg on there, any way to access that egg behind?

Thanks for the tip. It still sucks that we need to actually enter the Mighty League, though.

BTW, since the Golden Eggs chapter is revamped in this update (it’s now 3 pages instead of 2), the walkthrough and the leaderboard need a big revamp as well. It will be huge work for the @admins, but I can wait.

I downloaded and installed the update. However, when I start the app up, I get a “Download Available” screen that I can’t get past. So, I can’t play now! What’s going on?

Why can’t I find this in the Amazon Android App store?
It still shows Version 6.0.1.
Google Play Store has it, but that is not the Angry Birds I originally downloaded. When I did DL and install it, I have TWO Angry Birds apps on my tablet.
The Amazon one with all my scores and the new one with NO scores.

Scratch that….with a random sardine shot not using any other birds seems to have reached 100% :/

Omg. Thank you for posting this. I feel like I played this level a gazillion times trying for that 100% getting 99% once. I guess the rule for this one is “without using any other birds….” After reading your post I got it on my 3rd try! Bless you!!

My pleasure @rcheek17 it was sending me nuts as well lol

Can someone explain to me how to play the Mighty League. I just started and am able to only get as far as 3 stars on the wooden league before it says I need to wait until the next day to play again. When the next day comes I always end up back in Glass league.

I beat the 3 levels in glass league and move up to wooden, wait a day, beat 3 levels then this keeps repeating. How do I keep advancing up?

I get messages that I’ve earned another sticker but have no idea where to go, to view the stickers I’ve earned.
What do the stickers DO for you, anyway? Or are they just fun diversions, like collecting bird wear?

In the sticker book sticker 20 is get all the tickets within the Movie episode levels. I can only find 7. Are there more? If so, where? I can’t find them anywhere.

I only found 4. Can anybody post where they can be found please?

Thanks the tickets can be had/seen in these levels, but a word of warning. Make sure you are online when collecting the tickets. I played offline for 4 of these levels and they don’t count for the sticker.once you have collected the ticket it is gone for good,i went back online and now stuck with only 3 tickets, the ones i collected while online.so think a lot of you are thinking the tickets don’t exist when you have probably erased them offline

I think my sticker book is glitched? I got all the tickets but the progress bar of that is stuck at 1. :(
Or am I missing something?

Can you please indicate where specifically in each of those levels the tickets are? It’s been awhile since I’ve tried to obtain this sticker, it says I only have 5 but I can’t find anymore.

So I downloaded the Google Play version and installed it. No scores for all my previous levels, but wanted to play the new levels. A few mores 3 star levels and that will be it. (56/63 so far)Decided to try the Mighty League. Stupid game! All the challenges are from previous levels! BORING! Now it says come back tomorrow to play again! Screw this. Uninstalling it.

Re @mp127 and @bullet posts, when can we expect updated leaderboard and placeholder for entering the golden egg score for this episode please? ;)

Still unclear what “movie levels” they refer to. The Angry Birds movie? Movie levels in other games like Seasons? As yet unannounced levels?

Is there a guide for the movie tickets? I believe there are seven of them and I am quite sure I have them all but not getting the sticker for it! Any help appreciated!

Since there is NO help anywhere online, this comment section is all I’ve found, I’ll share what I’ve learned about the collectible Shockwaves.

As ixan57 noted higher up, MAKE SURE you’re online. I’m always online, but my game has this weird habit of quietly losing the ability to detect the internet connection, I only find out when I can’t watch ads to get a Sling Scope. As such I THINK I got them all, but the Mighty League sticker only says I found 3 while I have 7.

When they were introduced, they were Mighty League Tickets, pink tickets apparently you would use to play in the League. So if you check walkthroughs for these levels, you’ll probably see those. When they dropped the ticket system, they were replaced with Shockwaves, the Bomb Bird with a circle of electricity around him.

Level 31-1, it’s two trees behind the slingshot, just use Matilda to bomb it from above.

Level 31-6 is what got me searching in the first place. High in the cliff behind the slingshot, those bushes can be passed through. Fire Boomerang towards the tower of stone, as straight up as possible without reducing power, and activate it pretty much immediately, he should slip right into the cave.

Level 31-10, the bottom left chamber/room, just keep attacking the concrete doors/gear and you’ll get in. Trying just now, a shot at the vertical door broke it and got to where the Shockwave was, one bird.

Level 31-11, what reignited my search. I followed the 3-star walkthrough for the red bird, shooting it up to the glass floor to tip over the TNT. Watch for it to set off all the other TNT below, particularly the “underground” ones, and make sure the sandbag in the middle drops (to the right of where the first TNT was). If you manage all that, Black bird to destroy the concrete lid to the Shockwave drain. Then some birdy basketball (I could NOT have made the shot without the Sling Scope I got by watching ads), yellow bird into the drain.

Level 31-15, either a red bird falls or knocks something off the compartment, or fire Boomerang over and use him to get it from the back.

Level 31-16, one or both red birds to break through the slide, 2nd red or yellow to get the Shockwave.

Level 31-21, below and to the right of the ship, just keep shooting over the ship to clear the way (the mast and the right end of the ship), one of the Black birds should get it.