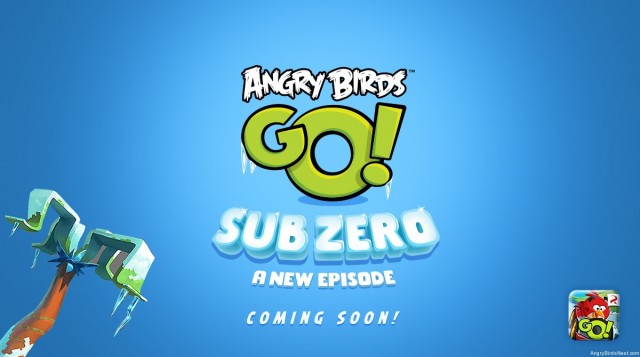 It looks like the polar vortex that has been sweeping through parts of the United States will soon make it’s way to Piggy Island. Today Rovio dropped a new teaser on Facebook and Twitter hinting that a new Angry Birds Go! Sub Zero update is coming soon.

We don’t have a lot of information yet about what this update might contain, but some are speculating it may contain a multiplayer mode. What do you think?

Kudos to @syafii for tipping us off to this and posting the image in his album.

‘Multiplayer will be coming soon, but not in this update.’

Dang. Thanks for sharing.

Well, @birdleader maybe we have to wait,maybe it will come in april, or maybe after it.

I wonder how the new update will be. Since all character racers are included in past tracks, I am curious about how we get to unlock new race tracks in a chapter…

Ice bird……????
All the birds are best at something

There is already a five mode

I think maybe Minion Pigs will be unlocked, or Space characters, or Mighty Eagle, or Mechanic Pig.

The Minion Pigs Will. but not ice bird, The Mighty Eagle or Mechanic Pig, @samjenkins.

Maybe we’ll be seeing some of the characters in Angry Birds Stella! :)

But only with a 10% chance. Seriously, I don’t reckon Rovio would include characters in spin offs…

Already a new update for GO! ?? I haven’t even finished unlocking the last 2 characters.

Reading about this update I got a new idea for a next episode, something with water and boats, like the Air one but with water! :)

no it’s not.It will be a snow episode

I know Luqman! Im giving an idea for a new episode after this new one.

oh sorry, i tought you’re talking about this update.

I think there won’t be a water episode on Angry Birds Go. Sorry, @luqman335.

I haven’t found any of new telepods on ebay yet and as I am still in bed after hip surgery I can’t check if our local toy stores got them (which I highly doubt). Anyway, I would’t play untill I get telepods but I am excited that update is coming soon and hope it will be great. Beside new content I hope that Rovio is going to fix some issues with current version of game.

What issues are you talking about, @cosmo2503?

They should play the game before they release it. Nintendo e.g. has test players. Nintendo would never release a game challenges which are impossible to do.

@chriss Perhaps he refers to some impossible challenges to overcome. There are some topics about this question.

Finally I will be able to use my new telepods! Hope it doesn’t disappoint!

Woah cool! Where did you get those telepods?Are they available in America?

Another look at the new snow-based racers in our previous News Roundup here:
https://www.angrybirdsnest.com/news-roundup-angry-birds-go-series-2-telepods-and-more/

Is it just me, or does that seem like a lot of karts for just one new episode?

I think that was on purpose. Let’s face it, as much as we love these games and toys, Rovio and Hasbro are in the business to make money, so introducing all new vehicles makes sense to that end..

But on the bright side, there are more choices available for buyers…

I think Mechanic Pig is making designs for snowmobiles !

You are absolutely Right, @sandeep-kamath!

Great concept! It looks straight out of Seasons, which I love, and it is most likely a place to unlock new CARTS, not characters…

In the past the telepods have been released in the retail stores about 2-3 months prior to the game release. The packages had the release dates printed on them. This was consistent for the initial release of Angry Birds Star Wars.
Just checked Ebay today and been to about 6 Target & Walmart Stores in my work travels this past week and it appears the second release of GO telepods are not released or the store-buyers have not placed their orders. There still appears to be a good deal of remaining inventory of GO telepods remaining on the store shelves.

Hope the update fixes the problems with viewing the other players on the top right side. Many times the names are the same for every postion for each and every game no matter which track one brings up. Now most of the time the score are zero. That system did work fine but in the last month it seems to have some opportunities for improvement.

Please answer my question. I played Angry Birds GO! Then I finished some of the episodes and I created an account on the time I reached 3rd Episode but I didn’t clicked the Verification link until its over 48 hours will my progress be back or be lost?

It will remain on your device.

Your progress will remain on your device but your Account will be erased.

Thanks everyone for replying ^ -^ I’m really happy that Angry Birds Nest can help me in my problems about my games.

Cant wait to see what new characters Rovio has in store for us!

I don’t think we will see any new characters, but definitely new karts!

I’m glad to see that now there’s actually stuff to do in the game after you unlock everyone. :P

Cosmic Crystals might be the final angry birds space episode.

I don’t think so. I think it’s just a less-popular app and therefore gets put on the back burner sometimes.

I don’t think the authors of Angry Birds Space finish this story.

I have a feeling that they are treating this as the backup game for updates… after all, they earn much more money on ABSW2 on telepods and character swaps.

I also find ABSWII is getting all the attention. Shame because for me ABSpace is the most intelligent and original.

I wonder why Matilda and Foreman Pig don’t have Telepod figures?

Is that definite? I’m dying for this update lol

Every time I try to update it it says I have insufficient storage but I have plenty of storage its so frustrating!

I downloaded a Zub Zero update earlier this evening. 18 new races… the familiar three race modes (3 modes x 5 races each) and instead of unlocking a new character you get 3 slalom races to complete against the clock. Oh, and all of these races are down a snowy mountain!

One of the novelties of this last upgrade is that you can pick up a coin doubler in the race, so you (obviously) double coins of this race. I’ve just seen it in a Seedway race.

Otherwise, I was wondering if Rovio has fixed some of the previous versions bugs. For example, Seedway, track 2, Time Boom challenge number 11 – Avoid 10 stone obstacles in a row… But there are still only 8 stone obstacles. So, it’s impossible, unless we discover some magic elf during the race :)

Otherwise, I was wondering if Rovio has fixed some of the previous versions bugs. For example, Seedway, track 2, Time Boom challenge number 11 – Avoid 10 stone obstacles in a row… But there are still only 8 stone obstacles. So, it’s impossible, unless we discover some magic elf during the race :)

Fixed bug discovered: On previous version I wasn’t able to overcome Seedway, Track 2, Fruit Splat Challenge 24 – splat at least 35% of fruit in a race. But I’ve just got it in the first attempt (with Hal). So, Rovio is fixing some bugs.