The Bad Piggies Weekend Challenge is back with all its rolly polly, jalopy goodness! Your mission, should you choose to accept it, is to be Piggy Island’s first Roller Coaster Tycoon! That’s right, with the Industrial Revolution comes amazing new theme parks for the enjoyment of all piglets, so forget about pushing cardboard boxes down steep slopes, build something modern that pulls 5Gs as it loops the loop! You’ll feel like you’re in the Danger Zone, buddy! 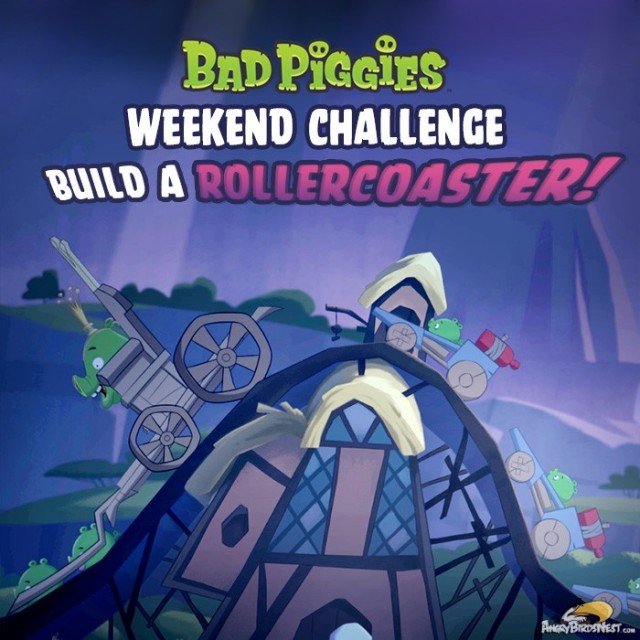 But wait, you say, there are no roller coaster tracks on any of the sandbox maps! How do you ever build a track? But then, there ain’t no time to second-guess yourself, ‘cos this message will self-destruct in ten seconds!

Back in the early days of motorized trans-pork-tation, articulated vehicles were a practical means of trans-porking cargo across mud and ice alike. I’ve had the luxury of riding in an articulated tracked Armored Personnel Carrier (like this one here) once and it everything about it was definitely awesome!

I would imagine that from an external point of view, watching such a contraption go up and down rough terrain would remind me of a roller coaster, albeit a really slow one. Due to technology limitations in Bad Piggies, that’s pretty much all you can build if you insist on having your roller coaster remain, as the Toyota ad put it, Grounded to the Ground. 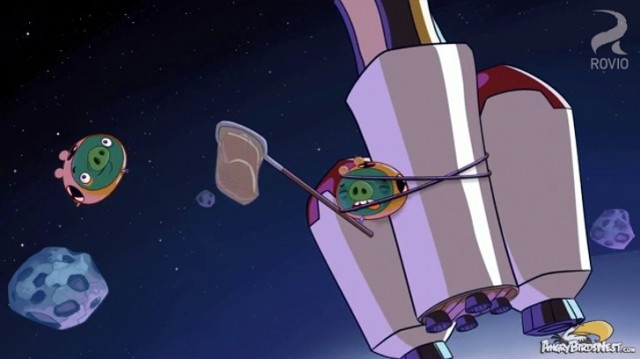 This is how we get groceries in Piggy Island!

But as we see in the Pigineering Department’s short history, you have to do like the Romans do in Rome. That means, if you’re on Piggy Island, you have to think Pig. The sky is apparently not the limit, and Titan rockets are used to fetch eggs from the “grocery store”, so there’s nothing overkill about overkill!

Without further ado, here’s what we came up with – a sky-train that literally flies on rails – stable in a level flight – but with the tendency to pitch up dramatically once its stability augmentation system is turned off.

But how does it work? Simple – if you’ve built planes and rocket ships in Kerbal Space Program (or alternatively, are familiar with aerospace engineering), you might have encountered such terms as Center of Lift and the Center of Gravity. You might also have caught sight of such aerodynamic principles being widely discussed in modern aircraft design, where virtually all advanced fighter aircraft are designed to be inherently unstable for the sake of agility.

In simple terms, placing the Center of Lift (CL) far ahead of the Center of Gravity (CG) in this contraption results in a natural and automatic pitch-up behavior. In normal flight, this pitch-up behavior is counteracted by the huge ROFLcopter rotor up front acting as a stabilizer. The rotor’s thrust is located above the ship’s CG, and this forces the nose back down. Bear in mind, the huge spinning rotor also creates significant gyroscopic force, so it’s all very slow and predictable.

Add that to the differing stall speeds between fabric and metal wings, the nose section acting like a movable canard, providing control authority as on the Eurofighter Typhoon, and you have a Bad Piggies creation that’s as complex as the real life aircraft and machines that inspire it.

This interesting relationship between various unstable components ends up creating a stable, predictable flight path, and the aircraft never goes out of control unless (i) you pitch the nose up by using the small propeller on the nose,(ii), you disable the stability augmentation system (rotor), and (iii) airspeed diminishes to the point where no aerodynamic lift is being generated. 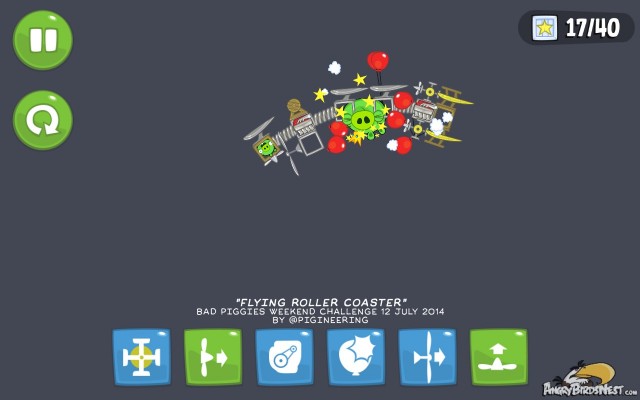 Nose mounted thruster rotates vehicle in a loop once wings are stalled. Vehicle then automatically recovers to level flight after stall recovery.

This thing will then loop the loop on your command, and automatically recover from said loop provided you have enough altitude to space. You could even fly backwards, in a limited fashion, and have a never ending roller coaster track in the sky.

The Point of All This

I could go on all day talking about the flight stability of the contraption being imparted by a series of mutually compensating mechanisms, forging order out of a chaos of junkyard parts, I’ll prefer to leave the schematics right here for your bacon-dynamic experimentation pleasure in case you wanted to see if it were really possible to use Bad Piggies as an exercise in basic aerodynamic theory. Try it. It’s simple to setup incredible machines, test them, fix them, and perfecting them is endlessly rewarding. 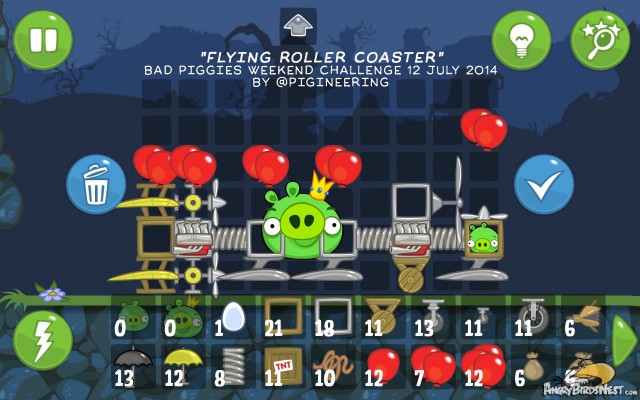 King Pig’s “Roller Coaster” executing its looping maneuver as shown in the above video works similarly to how the Russian Su-27 Flankers execute their famous Pugachev’s Cobra and other physics-defying aerobatics – the pilot may activate functions which disable the Angle of Attack limiter, allowing the aircraft to pitch up dramatically beyond normal parameters.

To me, it’s kind of splendid how Rovio has managed to create a deceptively simple game that has limitless potential, but also sad in that those who appreciate such are in the minority. Yes, I get it, game design is all about instant gratification, fast-paced progress and over the top graphics these days…

But I like the old days, where games you bought came with manuals that looked like operating instructions for a real fighter aircraft. And you spent months if not years (or even decades) appreciating what was in that game. Bad Piggies of course doesn’t come with such things, nor does it pretend to be anywhere close to a ‘serious’ physics simulator. But true creativity is about re-purposing the most unexpected thing to create something extraordinary in your own special way.

That’s why, at least for me, Bad Piggies hits the right spot, and will definitely be one of those games that I’ll be playing for years, if not decades. It deserves to be recognized as a classic, even if it can’t hold a candle to the popularity of Angry Birds. Because to me, whatever I create and spend time with in the Field of Dreams kind of ends up having a ‘soul’, a machine soul, with individual characteristics and unique operating parameters. It’s what makes the hundreds of hours I’ve spent playing Bad Piggies just about priceless.

We hope you’ve gained some insight as to what makes the Bad Piggies player tick. It’s all about appreciation for art in motion and having some measure of attention to detail!

The author has played Bad Piggies since 27 September 2012 and founded Pigineering with pork-mission from the King Pig Office (Rovio). Approximately 99% of said play-time was in the Field of Dreams. The author knows nothing about “real engineering” or “aerodynamics” besides crashing paper planes. This is bacon-dynamics – it sounds like aerodynamics and is tastier!

Say hi on my Facepork page and view about a hundred videos of bacon-dynamic expression on YouBacon. Nothing says Freedom louder than bacon-dynamic self-expression!

I’ve made a Train and a Blimp before, but never a Roller Coaster, sounds like something new to try

Hint: While most of the community submissions (mine included) to date use Field of Dreams, Flight in the Night is the perfect venue for some roller coaster action!

This challenge was difficult, so I made a machine that takes the karts and places them in right!
http://youtu.be/8x3lKQwIMkM
With No Power-Ups! @Les-Toreadors May you Rate this?

That’s a very cool take on a simulated all terrain vehicle course! The artificial ‘hill’ having powered wheels looks very useful for some other purposes too – conveyor belt anyone?

Thank you @Les-Toreadors and @Joeyba :)
I really don’t like the rope of BP, this should be able to “Draw” like Amazing Alex.

True, more can be done with ropes, but the level of customization & simulation is likely beyond the simple scope of this game. I know of at least one person who got around this by simply Photoshopping ropes to things – such as cutting and pasting rope sections around a series of wheels to make a “bulldozer” image.

Ropes were more fun in earlier versions of Bad Piggies – you could collect stars and detonate TNT remotely with them. Led to interesting aerial ‘mine sweeping’ or exploration aircraft like this: –

The PIGineers never fail to amuse!
(Would love to see some new creations.)