There are a total of three Golden Eggs in Angry Birds Seasons Wreck the Halls. One has been found in the levels themselves, and a second — the “Big Cookie” — unlocks after you 3 star every level, and a “New Year’s” Golden Egg that unlocked automatically at 8am UTC on December 31st. This page will serve as a one stop shop for easy access to all the walkthroughs.

Golden Egg #27 – Big Cookie: This will be unlocked after you 3 star all levels.

Golden Egg #28 – Level 1-15: Zoom out and you’ll see a Golden Egg encased in ice sitting on a ledge in the top right hand corner of the screen. Just waste Big Brother and aim a Yellow bird up there to nail it. If the force of the impact doesn’t break the ice then its fall back to Earth should (this is Earth right?), so be patient. Good Luck!

Golden Egg #29 – New Year’s Egg: This Egg unlocks automatically at 8AM UTC on 31 December. This is the first time a Golden Egg is simply unlocked and not obtained. Thanks to the many users who have helped with this. 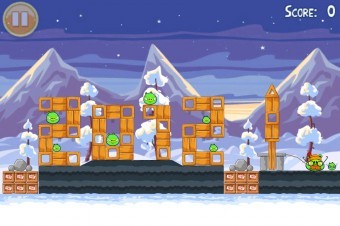 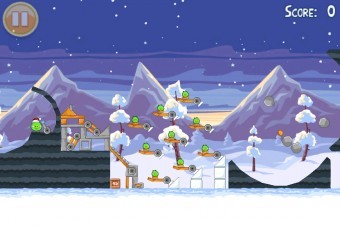 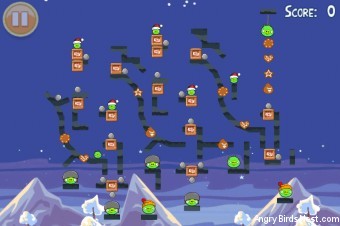 Thanks for the info. We may add this to the post with the disclaimer “It seems”, since Rovio could change things in an update.

Fair point, and actually, 31st does seem a raather odd date. Apparently its around 15 days and 13 hours from now, so I think thats the 31st

maybe its a new years level !

same time all the other levels were released at

It’s 8am GMT, the time it is on the Prime Meridian (the line that determines 0° East/West on the Earth, similar to how the Equator is the line that determines 0° North/South). That equates to different times in different time zones. Mine just so happens to be 3am. Using time GMT for online releases allows for a standard way of making announcements for anything that is to be released everywhere simultaneously. So, even though our clocks read differently, we all get the update at the same time no matter where we are.

Its only 4 days from christmas. Maybe it is a new years level. Thats why it is on New Years’s Eve.

Yh, although surely midnight on the 31st/1st would be a better time? ie 8AM GMT on the 1st? I guess only Rovio knows, and time will tell

How do you guys know there is this secret #29 golden egg? Could it be a special New Years Level?

We explain how we know in the post. Plenty have reported it, and I have confirmed it.

With all due respect, you don’t really explain how you know about #29. “Plenty have reported it…”? How do they know if it’s due out on the 31st? How have you ‘confirmed’ it?

I have confirmed it. You can set the date on your device to 31 December after 8am UTC and see the egg appear. But I warn yu that this can have significant side-effects on other apps and your system as a whole. If you want to see images, I posted some in the forum

” This would be the first time a Golden Egg is simply unlocked and not obtained. ”
I think it’s supposed to say that it’s simply obtained and not unlocked.

I believe what I said is correct. The Egg unlocks on its own; the user does not obtain it.

I’m wondering how this mysterious New Year’s Eve GE will be obtainable by potential new users who may start ABS in January, and/or after Rovio removes the date/time look up coding from Wreck The Halls, or even for those who, God forbid, find that their .lua files somehow got toasted.

You might disagree, but it seems that another ABS GE issue has the potential to arise.

Time will tell. I don’t think it will be much of an issue though.

Actually, it possibly could be partially obtained. We didn’t learn of this until everyone had already started playing. It’s quite possible that there needs to be a requirement to complete at least one level first, or possibly three star a level.

The only way we could find out is for someone to start fresh on Dec 31 without having played a single level. Just about anyone who visits here won’t fall in that category…

Not trying to be a Debbie Downer, just bringing to light what possibly might be.

True, but since I transfer my progress so frequently, maybe I can try it after we get the posts updated and such.

Assuming PC gets it, I can let you know, as I am yet to start WtH on PC as I bought it during the sale.

Yep, I have played no levels on PC, but when I turned it on, fireworks appeared on the WtH box, I clicked on it and it took me to the golden eggs page

The wording is correct if you take unlocked to mean that we are able to play it and obtain to mean to find it in a level or meet a certain in-game condition. In other words, he is saying you don’t need to do anything to unlock ABS Golden Egg #29, besides playing after a given time.

When I tried to get it, it fell off, and was about to hit the ground when my device ran out of batteries and shut down. I guess i’ll try again later! Haha!

What time would this be in Washington,DC?

Is Rovio HQ in the time zone that uses PST time? That would explain why they use 8am GMT time for their releases, as that would be midnight PST.

Would I have to be online to unlock the secret EG (ipod touch user)?

You probably will have to be. It’s a time sensitive extra.

Yes, you will have to have an Internet connection, just like the daily levels.

Ok Thanks. Have a Happy New Year)

You know,I think G.E. 29 will be a present that sends Youtube.[Just like in Seasons Greedings.]

I don’t think so. There is already a present that links to the Wreck the Halls animation.

It seems it’s true. The extra Golden Egg that’s supposed to show itself on the 31st did appear. Upon opening Seasons, I saw sparks coming out of the Wreck the Halls selection icon and the Golden Egg did appear. The level contains “2012.” Birds to use: 2 Whites, 1 Globe, 1 Plain Red.

Please give our admins some time, they could make it when they wake up.

a true fan would post it right away. lol

Sorry about that guys. Apparently I didn’t save the scheduler. Though a little patience would have been appreciated as well

It’s there I needed to change the code. I will ask BrdLeader to rearrange later, since it sorts by post number by default.

huh i got the golden egg too

Love the fireworks on the main screen

Happy new year fellow flingers :-) this lvl is cool but please don’t be shy with posting your scores for this lvl as I wanna see how bad I am at it lol
Have fun n stay safe tonight !!

Hey Slim I found out one Bug in this release of GE. Some times the Horizontal Yellow line which is located on the black line to see your locations world wide ; even says it on top that World ” Top ” were the score numbers and Yellow star which say 75/75 . This Yellow line Disappear on all Episodes. that Happens only to me . ??? or Somebody else ..!! Please let me know.???

No, that just happens occasionally, especially when switching in and out of the app (like between the app and Safari, for example). The current version of GameCenter is not working well with multitasking, so that’s the primary issue.

Yeah, I’ve had that, and you might find some episodes get the line back before others, and from my experience it can take a few minutes for them all to sort themselves out. Should get there in the end though!

at what exact time is it in the philippines?? tnx…..xDD

I have 3 stars on ALL the levels including Wreck the halls, but i don’t have the big 3 star cookie for wreck the halls. I KNOW i have checked more than 10 times… I’ll try to figure it out. Any similar circumstances?

Have you double checked the Episode Selection screen, where it says xx/75 stars?

Probably just a glitch, but it hopefully isn’t happening to others. If it is there should be a bug alert. I probably need to re-update or something

Please use the “reply” buttons to keep conversation threads intact.

What device are you using? This is caused by errors in the settings.lua file. It is not widespread but it happens a bit in Seasons. This is the first I’ve heard about Wreck the Halls though.

I am using a Samsung Galaxy S Captivate with Cyanogen Mod and Glitch Kernel. I solved the problem. A long time ago ALL my stars were erased, so i bought an app called “3 stars in Angry Birds Seasons”. It updated Wreck the Halls but no 3 star cookie. Once they unlock the 3 star cookie by updating the app, I’ll have it just fine.

the episode screen says 74/75 stars but when I look at he levels screen each level shows three stars. Can’t get the big cookie. Been going over each level again to confirm 3 stars but this is time consuming. Any ideas?

It should be clear which level is short based on the level selection screen. Level 4 is the hardest, but that counter is basically impossible to glitch.

I am trying to get the golden egg 29 on my iphone 4 however it’s not there?
I only recently completed the level this month but the egg does not appear? I’ve got 3 stars on all the levels, restarted the app but nothing appears?
Is there something else i need to be doing?

See the GE-29 walkthrough page. The bug is listed there.

I completed 3 stars on all levels , but I cannot access the present for the second golden egg. Playing on android. Any Suggestions??

I think you are on the wrong episode, sorry.

To this date it looks like the unlocked/unearned golden egg is still there after all these years. If my memory serves me correctly I think this is the only golden egg in all of Seasons that was unearned.