There are two Golden Eggs in Angry Birds Seasons Haunted Hogs. For complete details on how to obtain each of the Golden Eggs and for our video walkthroughs just click on the respective image below to be taken to that page.

Golden Egg #38 – Big Bat is unlocked after you 3-star all levels. Once you’ve accomplished this goal tap the bat in the middle of the golden egg screen to open up the level.

Golden Egg #39 – Level 1-9 has the Golden Egg but it is not visible. First, you must destroy the rightmost donut with the Red bird by detonating the TNT in the bottom-left of the level. Destroy the donut that appears next to the old TNT with the Orange bird. The trap door in the extreme top-right will drop, so snipe the donut with the Yellow bird. Now the Golden Egg appears in front of the slingshot, so grab it with a ricochet shot from the Red bird. 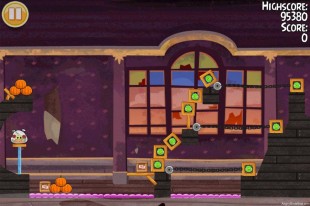 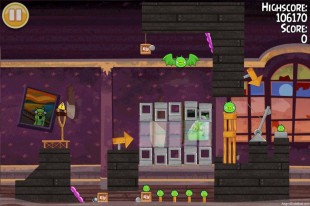 You don’t have to use the left TNT to destroy the first donut – I found it easier to fire the red bird through the hanging rope to knock the tower over. This has the added bonus that the path for the yellow bird is clear :)

Getting that bottom left side donut can be a challenge with the orange bird. Needed a direct hit and manual activation.